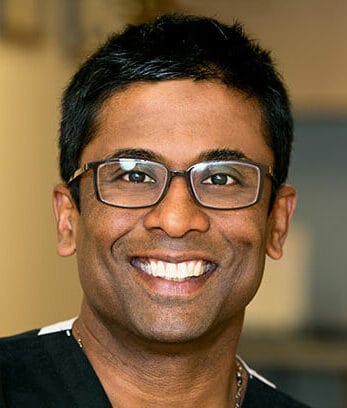 Dr. Saswata Roy is double board certified in Otolaryngology/and Neck Surgery and Facial Plastics & Reconstructive Surgery. He received his medical education at the University of Nebraska Medical Center and completed his residency at the University of Minnesota Hospital & Clinic in Otolaryngology/Head & Neck Surgery. He pursued a post-residency fellowship in Facial Plastics & Reconstructive Surgery at Inselspital in Bern, Switzerland in aesthetic, reconstructive and skull base surgery.

He returned to the United States to complete a fellowship in Pediatric Otolaryngology at the Children’s Memorial Hospital in Chicago, IL., focusing on pediatric ear, nose, throat, head, neck and airway problems, Dr. Roy completed his third and final fellowship in Cleft and Craniofacial Surgery at the Shriners Hospital for Children in Chicago. His training involved managing congenital, traumatic and oncologic deformities of the head, face and craniofacial structures.

Dr. Roy moved to Jacksonville, FL in 2004 to serve as the Director of the Facial Anomalies & Cranial Base Program for the Nemours Children’s Clinic, and also served as the Chief of Otolaryngology / Head & Neck Surgery for Wolfson Children’s Hospital. His division was a much needed resource for children with complicated head and neck issues. Dr. Roy has been named “Top Doctor” and “Best Doctor” by multiple local and national magazines, including Jacksonville Magazine, Who’s Who Magazine and US News & World Report.

Dr. Roy’s practice focuses both on pediatric and adult ENT, head and neck, facial plastics, reconstructive and craniofacial disorders. Along with evaluating kids and adults with common ENT problems, subspecialized care is provided for the following:

• Endoscopic and Open Cranial Base Surgery

• Laser surgery for the head, face and neck

Dr. Roy is an avid runner and triathlete having completed over 30 marathons and ironman races. He spend his spare time with his wife and their two Australian Shepherds, Leo and Caillou.